In a conversation about their forthcoming book, authors Cynthia and Sanford Levinson describe their process for creating Fault Lines in the Constitution and explain why it's a much-needed addition to the canon of books about the Constitution for young readers. 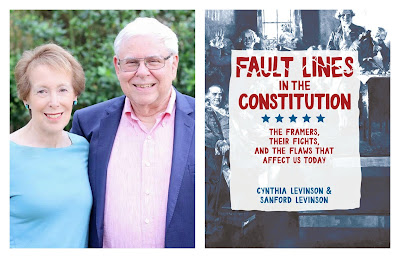 Q: When you began working on Fault Lines in the Constitution, did you have any idea how timely and relevant it would be?


Cynthia: When we started working on the book in June 2012, we actually did know that it would be timely and relevant. We just didn’t anticipate in what ways it would be timely or how interested the public would become in the Constitution.

Sandy: I’ve long believed that our founding document is at the root of many problems in American politics but that people aren’t aware of it. My first book on this issue, Constitutional Stupidities, came out in 1998—nearly 20 years ago. Since then, I’ve written three more books on how the Constitution promotes injustice, gridlock, and undemocratic decision-making.

Donald Trump’s Electoral College win and his inauguration as president—despite his loss to Hillary Clinton by nearly three million votes in the popular election—woke up the public to this aspect of the Constitution. People seem even more incensed now than in 2000, when George W. Bush became president after losing the national popular vote to Al Gore. Since Trump took office, people have started paying attention to such obscure sections of the Constitution as the Emoluments Clause and the Twenty-fifth Amendment.


Q: President Donald Trump has said the Constitution is “archaic.” Do you agree?

Sandy: Yes, we agree with the president’s statement that the Constitution is archaic. As we write in the book, Supreme Court Justice Ruth Bader Ginsberg made the same point during a visit to Cairo in 2012. Their reasons for saying so, though, are probably different from each other’s. The document has proved to be at least somewhat dysfunctional since 1787 and simply does not serve us—a 50-state nation spanning over 5,000 miles and encompassing 325 million people—very well while facing 21st-century threats. 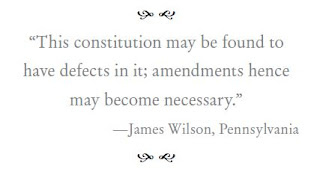 Sandy: Fault Lines in the Constitution is different from other books for young readers in two major ways. First, the book focuses on the structure of our government, rather than on the rights that we have as citizens, as many other books do. Second, it focuses on how the Constitution does not work, rather than on what a great job the Framers did in creating our form of government. So, we don’t proceed through the document in order, explaining each section.

Cynthia: To give examples, with the exception of issues surrounding habeas corpus, we don’t discuss the Bill of Rights much at all. Instead, we highlight the inequities caused by the fact that every state, no matter the size of its population, has two votes in the Senate. Furthermore, we bore in on such problems as states having control over voting procedures and restrictions on running for Congress. At the same time, we unabashedly leapfrog over entire articles!

Q: Why is it important for young people, specifically, to know our Constitution and to look at it critically?

Cynthia: Young people feel fervently about unfairness. They want to live in—and take action to create—a society that is just and equitable. Some aspects of our Constitution promote those qualities; other, fundamental ones undermine them. Helping middle graders and high schoolers understand the underside of our system can encourage them to change it. In the book, we discuss ways they can do so.

Sandy: In addition, they will vote. Fully informed and concerned citizens are essential to establish and maintain a democracy.

Q: What do you think about the state of civics education and constitutional literacy in our youth? And what role can Fault Lines in the Constitution play? 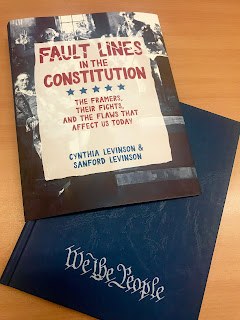 Cynthia: Alas, there is widespread agreement that civics education has been vanishing from our schools over the last several decades. This is especially unfortunate given the increasing numbers of immigrants, who are unfamiliar with our system of government and the role they can play. Even kids and too many adults who have grown up here are unfamiliar with the fundamentals of our democratic system.


Fault Lines can engage young people in civics class because it’s honest. And, it doesn’t all take place in the 18th century! Unlike most books, which laud the Constitution and the Framers, ours is candid about specific ways that the Framers’ compromises affect all of us, including kids, today. We also describe other—frankly, better—ways of doing things, such as registering voters and electing presidents. Our democracy may be the oldest but we’ve hardly worked out all the kinks. Students will find it enlightening to look at other models.

We hope teachers will take advantage of Fault Lines to re-introduce civics into daily debates and discussions. And, surely, everyone will want to give the Constitution a grade, the way we do!

Q: Does Fault Lines in the Constitution present a particular political perspective?

Sandy: We believe the book is fair and even-handed. We are particularly pleased that people with a range of political views support Fault Lines. Journalist Dan Rather and Ted McConnell, who is executive director of the Campaign for the Civic Mission of Schools, as well as Wallace Jefferson, a Republican former chief justice of the Texas Supreme Court, all endorsed the book.

Rather says it will be “controversial.” McConnell calls it “entertaining” and “thought provoking.” Jefferson finds it “compelling.” There is something for everyone.

Q: Has co-authoring the book been a challenging process?

Cynthia: Certainly! As we drafted the book, I posted periodically on social media about the process of our co-authoring it. There were even times when it was exasperating! Overall, though, we found it informative and rewarding.

Sandy: I had to agree to eliminate extraneous words I’m fond of, like “indeed.” Cynthia had to figure out how to translate my academic-ese to a kid-friendly narrative. There are still some topics we disagree on—ranging from how to pronounce “gerrymander” to our debate on the necessity (me) or foolhardiness (Cynthia) of another constitutional convention.

Cynthia: But the most challenging part has been keeping the book updated.

Q: Yes! You’ve had to go back and revise certain chapters in the book relating to topics such as gerrymandering, filibusters, the electoral college, and even the passage of an ERA amendment in Nevada. What did you do to address these changes quickly and accurately? 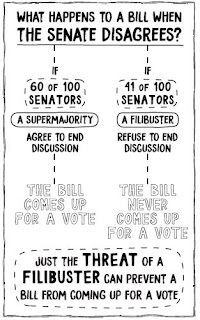 Sandy: Chapter 4, which focuses on requirements for supermajority votes in Congress, particularly for overcoming a filibuster, has been, from the beginning, one of the most uncertain and evolving chapters. Initially, we debated at length whether a chapter on Senate rules belongs in the book altogether. After all, although the Constitution does stipulate that agreement by more than half of Congress is needed for some decisions, such as treaties and overriding presidential vetoes, it doesn’t require senators to filibuster. It merely allows both houses to adopt their own operating procedures. Nevertheless, the filibuster—or the threat of one—is a very prominent way that the Senate operates—or fails to—these days.

Cynthia: Also, Sandy predicted early on that this house might change its rules after the 2016 presidential election. He was right! But we had to send the Advanced Readers Copy to print before they took this action. Three days later, when they did, we re-wrote the chapter and sent the new one to reviewers.

And that was just the beginning of the updates. Given decisions by federal courts on gerrymandering, recent state-level changes in voting requirements, and increased public interest in the Constitution, we’ve made other revisions in both the text and graphics. Our editor has been extremely patient and supportive!

Q: How do you plan to address future changes?

Sandy: Fault Lines in the Constitution is an inherently news-responsive book. We joked that it should be published in three-ring binders, and we’d send loose-leaf updates. I then proposed a subscription website, which was also a joke.

Cynthia: Thankfully, we have a blog on which we’ll post updates both regularly and on an as-needed basis. We look forward to getting readers’ responses, including suggestions from students that might entail revisions prompted by the news.

Q: Lastly, what do you hope readers get out of this book?

Cynthia: My previous books all dealt with social justice in various ways—through civil rights in We’ve Got a Job and The Youngest Marcher, through racial, national, economic, and religious diversity in Watch Out for Flying Kids, and through doing good in Hillary Rodham Clinton. Fault Lines in the Constitution also follows this pattern. I hope it helps further very important discussions taking place today among young people.

Sandy: We state at the outset that the Preamble sets worthy goals for the Constitution. One of these is to “establish justice.” In the end, we grade the document on how well it meets the goals, and we give it a low score on this one. We hope the book will encourage young people to revise or work around the Constitution so that our system is more just.

Find more information about the book here. Fault Lines in the Constitution will be at your local library, indie bookstore, or Barnes & Noble on September 1st!